When not trying to get some writing in–on my slowly-developing novel or on the blog–or preparing my impending Shadowrun campaign, I’ve been steadily working away at more stuff for Frostgrave.

Without further ado, here’s my second warband all painted up, an elementalist and his retinue: 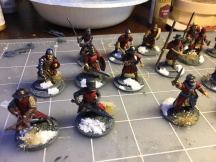 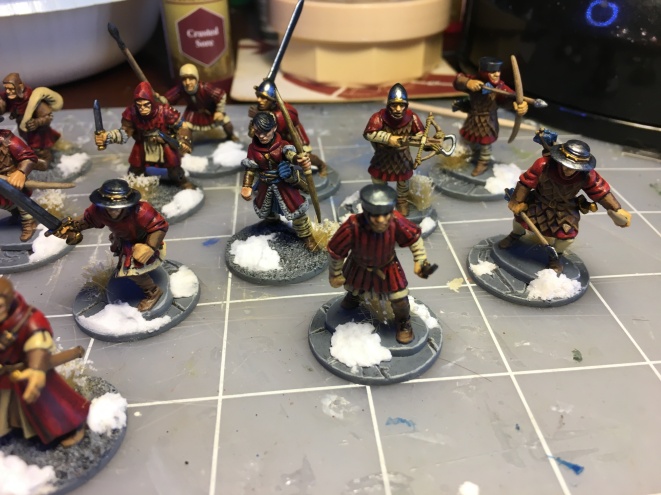 As you can see, this one is largely Fireforge historical miniatures, with some kitbashing from the Oathmark humans and some Frostgrave plastics. Some of the miniatures have Renedra textured bases, which I’m pretty happy with, but some were assembled and based before I had the bases (or started this warband) and so there’s a little bit of a hodgepodge. As you see, I’ve added some foliage tufts and snow paste to these bases (as well as the first warband) for extra effect.

(It’s really bugging me that I can’t figure out exactly what my snow paste is made of. It’s definitely a spackle base, with some sort of glitter and maybe a gloss medium added. If I can parse it out, I can make my own much more cheaply, which would be nice!)

This warband does not have as wide an array of specialist soldiers than the first one–I figured the elementalist would want to focus on combative soldiers bringing the pain over utilitarian ones.

I’ve gone back and forth in my head about how strongly to color-code my warbands (I’ve inadvertantly got Christmas colors going now, it seems). I often like the rag-tag look for its thematic nature (reinforcing the expendability of soldiers), but there’s a great convenience (both in the efficiency of painting and in recognizing minis on the table) to matched soldiers.

After the first color-coded warband I’d finished, I actually had started to do some rag-tag soldiers. But, after painting about ten or so, I realized that they rather handily fit into some color-coded groups: browns for my barbarians, purples and blacks for my cultists, etc. So, I think I’m sticking to color-coding for now.

One of the reasons I picked Frostgrave to get back into minis gaming (other than the setting and style of the game, which are both right up my alley) is the relative ease of having enough miniatures myself to invite friends to partake in the fun of the game without having to talk them into purchasing and painting a bunch of minis for themselves. Having over the last decade talked friends into Warmahordes, Infinity and Malifaux, I decided I’d better front the cost of the game myself and not have to persuade anyone to spend anything if I want to best maintain my relationships. Of course, I’m not stopping anyone who wants to join in with their own warband!

My Proxxon hot wire cutter came in a few weeks ago as well. I almost immediately jury-rigged some jigs (one for cutting circles and one for “ripping” styrofoam to adjust its thickness) based off of the very nice ones done by GeBoom at Shifting Lands. I’ll definitely want to invest in their jigs eventually (and there’s a lot of other cool stuff, like their window templates, I’ll want to add to my order), but I was excited to just get things going. Maybe too excited with the number of styrofoam rings that ended up on my study table. I’m still making a lot of mistakes and learning a lot with each task or operation, but so far I do have one pretty decent (and multi-leveled!) round tower for the Silent Tower scenario (as well as just generally useful terrain).

I’ve got a larger square tower in the works and a number of cut foamcore and insulation foam pieces that need texturing before I glue them to bases for more general ruined terrain.

I can’t say enough good things about the Proxxon. It’s just an amazing tool. I think I’d love it even more with the Shifting Lands add-ons, but I’m able to do a lot of stuff with the base unit and the two jigs I put together with a nail, leftover 1/8″ hardboard and some wood glue.

I’d focused on terrain for a short while before I went back to painting minis, which is where I’m feeling the current pull. It’s all got to get done eventually; I’ll post more pics as things develop.