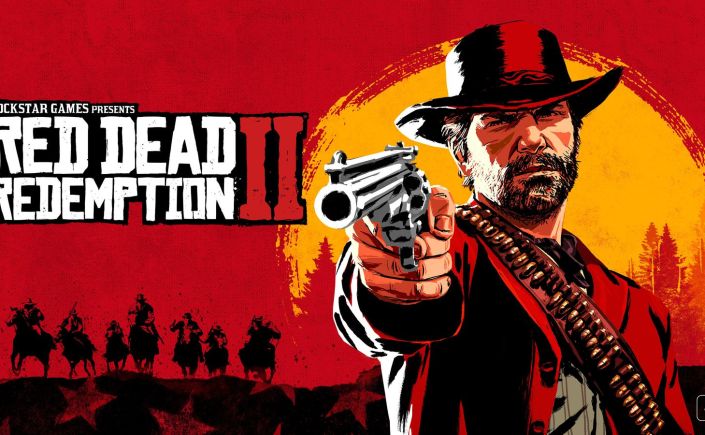 I ride up to the crest of a hill, my trusty mare stamping at the earth as we come to a stop. Across the valley (modeled after Colorado, it seems), a stagecoach pulls into view, rolling down the deep ruts of a well-traveled road, unaware of the danger that awaits it.

I check my pocket watch. It’s right on time, like my informant at the train station promised. Through binoculars, I can see two men riding atop the wagon, one driver, one riding shotgun. A few riders flank the vehicle, rifles in hand.

Nothing too serious. With the right tool, I’ll make quick work of the guards and the driver. If my lock-breaker won’t do the trick, a well-placed stick of dynamite will open the strongbox that holds my reward. I just need my lever-action rifle to kick things off, the one I’ve customized with dark wood covered in dark leather, black metal accented with gold engraving.

Unfortunately, I have to open up a menu and scroll through more than a dozen longarms to get what I’m looking for. It’s a game, so maybe I could live with that, but I’m tacitly asked by to ignore the massive hammerspace my horse must have in the invisible quantum field that surrounds my saddle. Having to choose what to take with me when I leave camp would have been far more interesting.

That’s been my experience of the game in the (frankly embarrassing) amount of time I’ve spent on it. Things seem great until the game’s systems ruin the immersion with rigid, often-nonsensical responses.

On an HD TV and and Xbox One X, the game is stunningly beautiful–except for the people. Their expressions are just a bit much, their faces waxen and on the wrong side of the uncanny valley. Not too beautiful, but still inhuman.

The physics of the game veers from the believable to the frustratingly sudden. I’ve lost a number of horses (typically after reaching the max level of bonding–and thus unlocks–with them) to having them suddenly run headlong into trains or wagons (after I’ve jumped onto said train or wagon). Likewise, in the midst of thrilling chases, I’ve been launched ragdoll-like, my horse crumpling beneath me on some unseen sharp edge of the terrain.

But it’s not the physics of the game that really destroys the immersive potential. It’s the asininity of subsystems of the game that infuriate. For a game about the last outlaws of the Old West, it makes little sense to include an “Honor” system that rewards not doing many of the game’s draws–robbery, theft, gunfights and bucking the law. What’s worse, the Honor system has nothing to do with getting caught by others. Even without witnesses, you lose Honor for looting a body or taking something that’s not yours. That’s not fun.

This is exacerbated by the fact that “restoring” or improving your Honor to a high level (where there are in-game perks) is tedious and uninteresting. Help people in radiant events while traveling, kindly greet all the people you come across, perform repetitive and dull chores (“move this from here to there” in camp). There’s nothing interesting about being a white-hat in the game except for mechanical benefits. Being a roleplayer first and foremost, I see that as exceptionally bad form in design.

The “law enforcement” system also makes little sense. There is one fun/interesting aspect: witnesses to crimes will try to run away and contact the sheriff or other members of “the Law.” You can chase them down and threaten them to keep them from tattling. Unfortunately, everything’s downhill from there. The witnesses don’t actually have to run to a specific point to summon the Law–once they make it far enough, they simply disappear to be replaced by lawdogs.

The excitement of this is further diminished by a number of other flaws: rob a store and an alert automatically goes up to the law when the robbery begins (unless you’re robbing a business’s secret side business). Wearing a mask only slightly delays identification of you as the perpetrator, even in a place where no one should know your name. Of course, if you can evade fast enough, you can leave the scene of the crime, hide out for a few minutes, and come back like nothing ever happened. Without changing your appearance.

Be identified while committing crimes and a bounty will be placed on your head–this bounty increases for each infraction, but killing an officer of the law only raises it by $20. According to the internet, the 2016 value of that amount is about $2,891.65.

If your bounty gets high enough, bounty hunters will start to seek you out–though they appear randomly and without cause for being able to track you down in the wilderness. Of course, you can avoid this by going to any Post Office and paying off your accumulated bounty. Apparently the Old West works off of the ancient Germanic weregild system rather than 19th century American justice.

This is complicated by the fact that many of the “iconic” outlaw activities of the Old West net very little income compared to bounty you’re likely to generate during the activity. For instance, robbing a train got me about $100 in goods and cash while generating a bounty of $380 for defending myself from the near-instantaneous onslaught of lawmen from their hiding places in the wilderness where they must have been waiting for just such an offense to occur.

Playing the game, I can’t help but compare it to WestWorld. The game seems more like an Old West themepark than any verisimilitudinous experience. Scripted actions, often clearly weighted toward “game balance” rather than any sense of authenticity serves as a constant reminder that the whole thing is a conceit, a game. NPCs are robotic and caught in activity loops, wooden and predictable. Actions have only short-term consequences before everything is reset to its “natural state.”

The story missions are mostly good and the characters within Dutch van der Linde’s gang have at least a modicum of depth–though most of the dialogue is canned and you have very little opportunity to control Arthur Morgan’s treatment of his companions (which, again, makes the Honor system seem arbitrary and ridiculous).

Red Dead Redemption 2 is being hailed as a massive success in open-world gaming, but I just can’t agree. The game doesn’t do anything that Witcher 3 didn’t do better–and more believably. And when a fantasy setting feels more real than a pseudohistorical one, its hard not to think that the creators have strayed pretty far from the goal.

Is the game fun? Yes, yes it is, but only as a game. Does it feel like the systems of Grand Theft Auto have been conveniently ported to the Old West without much scrutiny. Yep. If you’re looking for immersion that gives you an easy time imagining yourself in Arthur Morgan’s shoes, you’ll find ocassionally satisfying bits (particularly while hunting, where animal behaviors are linked to some real-world expectations–at least in terms of diurnal/nocturnal cycles) but you’re ultimately going to be disappointed. I don’t regret picking up the game (even in limited edition at full price) and I have enjoyed the time I’ve spent on it, but I just can’t help but feel that the game could have been much more.

I’ll probably keep playing it for the time being to kill time, but not without the feeling that I could be employing my time to higher and better purpose. If I manage to finish it before Fallout 76 drops, then I’ll finish it. If not, I doubt I ever will. Certainly not in the near future given the games set to release before the end of the year or in 2019.