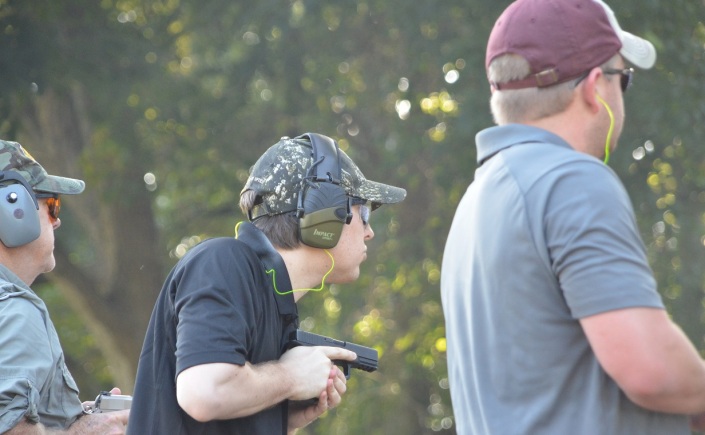 This Saturday, I’m going to a combined defensive pistol and defensive carbine class. It’s not my first tactical shooting class, and I’ve in the past been an NRA Pistol Instructor and a Texas Concealed Handgun Instructor. Regardless, the occasion seems a good one on which to share some of my thoughts about violence given my Christian faith.

This is not an easy subject and, while I’ve spent a fair amount of time studying various martial arts—krav maga, karate, sport fencing, historical European martial arts (swordplay, knife/dagger fighting and wrestling, mostly) and shooting—I can’t say that I’ve ever been in a real fight. As such, I simply don’t have access to the experience of either the event itself or the psychological aftermath. I invite those with such experience to comment on this series; I’m going to attempt to restrict myself to the abstract and philosophical side of things.

As a person of staunchly moderate political leanings and progressive theological positions, I’ve had the rare opportunity to be considered both conservative and liberal. Coming from one of the most diverse counties in the U.S. and being a theatre person with friends holding a diversity of sexual orientations and gender identities, moving to College Station put me solidly in the liberal minority, at least among the studentry (I nevertheless had no problem finding likeminded people—Texas A&M is a big school, after all). Then, going to Austin for graduate school, I suddenly found myself to be considered a conservative by my peers.

When many of my fellow students of medieval and renaissance literature discovered that I had a license to carry a concealed handgun, they suddenly had this idea that I had fashioned myself a vigilante; that I wanted to live in the Old West and have a shootout at high-noon; that I had naively decided that combat would be fun (or evilly decided that hurting other people could be enjoyable). When I explained myself, however, I often found them surprised.

I told them that I preferred to carry—legally, and not all of the time (campus carry was illegal back then, of course)— a firearm that I had trained seriously with because that way I knew that I would walk away from a violent confrontation (or, I at least had a good chance of doing so) and that I could try every non-violent dispute resolution technique I could think of rather than responding out of fear. Indeed, as a Resident Advisor at Texas A&M I had been trained in conflict de-escalation, and Texas requires similar training as part of the concealed handgun license coursework. I am convinced that there is no more valuable skill that a person may learn—whosoever they may be—than how to communicate peaceably, respectfully, empathetically and constructively with others, even if that results only in an agreement to disagree. In the broader scheme, more training in the world in how to relate and talk to people with competing interests would save more lives than all the firearms training in the world.

That was certainly my experience the only time I ever came even remotely close to drawing my weapon when carrying it. This was, conveniently, in Austin. K and I were living in an apartment on the southwest side in a suburban area well away from campus. Nevertheless, at about 2:30 in the morning one night, some undergrads in the next building over were blaring music, drinking heavily, and throwing beer bottles into the parking lot from their third floor balcony.

Admittedly, I am a very grumpy person when disturbed from my slumber. I got up, put some clothes on, and holstered my pistol in concealed holster just in case. The first move was mine, and I immediately made a mistake: upon getting close to their building I yelled up at them to turn the music down, using no expletives but not in the friendliest of voices. Immediately, three men, all very inebriated, ran down the stairs to confront me. I stood my ground but tried to backtrack, apologizing for yelling and explaining that I wanted to come ask them to turn the music down and stop throwing beer bottles rather than just calling the police.

They responded with threats. I kept my hands up and palms toward them in a non-threatening manner (also because it happened to be a good defensive position, just in case), but I also made clear that I was not intimidated. I repeated my request matter-of-factly, despite their threats at my mention of the police (they were happy to remind me that they outnumbered me, despite the fact that they were all practically falling over on their own and any collaboration between them was certainly out of the question). In the end, it became clear, perhaps as it should have been from the beginning, that I could not reason with them. I cautiously removed myself from the situation, returned to my apartment and called the police. The next day, I reported the confrontation (although not my possession of a firearm, which was immaterial as it was never produced) to the apartment management. The offending tenants were evicted for threatening fellow residents—a clear violation of the Texas Apartment Association form lease.

I’d like to think that, despite my rough start, the confrontation went about as well as I could have hoped for—I walked away unscathed and without the regret and what-ifs what would have attached if I had injured someone else—justifiably or not.

But the point of this post is not to talk about me (although I hope the long introduction has provided some background to my own biases and experience). Let’s talk about weapons, violence and Christianity. We’ll start in the next post.

2 thoughts on “The End of Violence, Part I: Introduction”