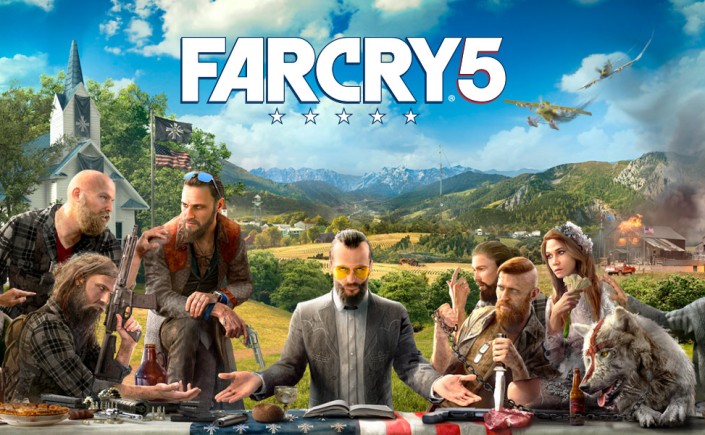 As a writer of both fiction and theology, the premise of the latest Far Cry game (creatively entitled “Far Cry 5”) quickly piqued my interest. Where the previous games in the series played upon the otherness of exotic locales, the latest installment brings the action close to home, setting us in (fictitious, though the geography is based on real geography in the southwest corner of the state) Hope County, Montana, a strange community of traditional heartland folks, stereotypical “preppers”–and a mysterious and dangerous cult calling itself the “Project at Eden’s Gate.”

The premise of such a location is full of narrative possibility, particularly in the current political and religious background of America. Here are some of the things I hoped to find within the game:

Was I naive to expect any of these things? Of course I was. On the other hand, as video games are pushing into a more maintsream and respectable narrative medium, we should be expecting our games to push the envelope, to make philosophical arguments and investigate both theological ideas and political ones. Spec Ops: The Line is an excellent example of a game that’s already done this, as are the Bioshock series (is there much that’s more interesting than a well-crafted video game that investigates a philosophical system like Rand’s Objectivism?) and games like Heavy Rain.

And to be fair, the game starts off in a misleadingly promissing way for my hopes. You play as a rookie deputy sheriff in Hope County, Montana; the game starts with you in a helicopter as part of a joint sheriff’s office and federal agent task force to arrest Joseph Seed, the “father” and prophet of the Project at Eden’s Gate. Walking through the Eden’s Gate compound, surrounded by tense believers with automatic rifles, knowing what you’re there to do creates a great dramatic moment with which to launch a story.

It gets better. You approach Joseph Seed to arrest him, and he does not resist. He does tell you that God will not let you take him. Exactly what you’d expect a cult leader to say. But his prophecy becomes reality. As you return to the helicopter and it attempts to take off, fanatical cultists swarm the vehicle, with some even throwing themselves into the rotor to cause the chopper to crash. Joseph leaves the wreck remarkably unscathed and with the obligatory, “I told you so.”

That’s where the narrative peaks, unfortunately–right when it poses the following fascinating questions:

Instead, we are treated with a two-dimensional bad guy, a stereotype onto which the elements of religiosity have been crudely grafted. Joseph Seed is made to look distinctly like David Koresh of the Branch Davidians, complete with 90’s-style yellow-tinted aviator glasses. He quotes (paraphrases, really) the Book of Revelations, but never mentions any other part of the Bible and never makes any concrete theological assertion–only claiming that the end is coming and people must repent and be cleansed of their sin. By sin, he apparently means the extra-biblical “seven deadlies.” One minor caveat to this–the signboard of the church in Fall’s End (the one non-Eden’s Gate church in the game) does have a reference to a verse (but not the text of the verse) in Jeremiah that warns to beware of false prophets.

The game sends you on a blood-soaked path of murderous resistance to Eden’s Gate without sufficient self-awarness to question what that really means, underlining it only with a repeated chorus of “America, Fuck Yeah!” The other characters in the story are likewise various survivalist and prepper stereotypes that bleed into a muddy morass that deprives the game of any real humanity.

And the cultists aren’t really even that convincing. Turns out, it’s drugs, not beliefs, that create the fanaticism of the “PEGgies,” as the game calls them. The enemies are dehumanized and the bodies in your wake only a tally of progress. This may be lamentably American, and perhaps that disturbed me most about the game (kudos to the writers and designers for that if it was intentional and not a sad symptom of our culture).

If you came to this post looking for a review of what gameplay is like, I’ll have to direct you elsewhere, as there are already a plethora of reviews to handle that. But I will admit that, if you like the previous Far Cry games, you will enjoy playing Far Cry 5. It’s the “theme-park” experience to be expected in this line of games and it does have a humor and gameplay style deep enough to entertain. I played through the entire campaign and–so long as I didn’t think about it too much–enjoyed it.

But I finished the game disappointed, as is common when some narrative promises us great ideas and interesting story in the previews but fails to adequately exploit and explore those ideas in the actual doing of the thing. In my struggle to ideologically bolster the lackluster storytelling, I even watched (yesterday) the half-hour movie teaser that Ubisoft made for the game (it’s on Amazon Video). This did nothing for me (though I did like the one they put out for The Division some time back).

And maybe that’s the greatest commentary about current culture to get from this game, whether the creators made the commentary intentionally or just happen to magnify this running theme. And that’s the idea that much of American Christianity is really only the cultural stylings of the faith appended to ideas that may be “American” but almost certainly aren’t Christian–the idea that Christianity is a style of doing things rather than a substantive approach to existence. Then again, that could be a concern of mine fully projected onto the game in a desperate attempt to create some meaning where I could find none.

That ultimate emptiness and sense of unfulfilment was all that remained after I finished the game and when I think back on the hours I spent playing it–a great opportunity lost by the writers, either because they did not understand the subject matter well enough to intelligently comment on it while coopting the trappings for the style of their game or because they opted not to make any particular commentary for fear of hurting sales. That’s understandable in a commercial sense, and money often influences all forms of art. But I can’t help but feel that it’s a cop-out anyway.

So, for the TL;DR (I know, it should be at the beginning, not the end): Far Cry 5, a game to play for mindless fun and a few cheap laughs, but don’t expect any depth. There is no there there.

One thought on “Review: Far Cry 5: No There There”