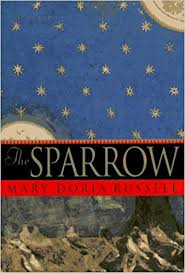 I know; I’m a little late to the game if I’m reviewing a book that’s twenty-five years old. But I’m excited about it enough that I really don’t care about that.

So, we’re gonna talk about Mary Doria Russell’s The Sparrow, an exposition of theodicy wrapped in a sci-fi tale that’s secretly a bildungsroman of sorts. If you’re not a theology nerd, “theodicy” is the word for the study of the problems of evil and suffering. In Christianity, in particular, this problem might be more specifically phrased as “If God is all-powerful and entirely good and loving, why does God allow evil and suffering in the world? Why do these things happen to seemingly good people?”

Job is my favorite book of the Old Testament, in part because it addresses this very question and gives us the best answer I think can be had for it. When God appears to Job at the end of the poem, God’s answer to Job’s questioning is to tell Job that he cannot understand the answer. It’s too complex, it’s too nuanced, for the human brain to comprehend in all its depths. The ultimate answer God gives that humans can understand is “Trust me.” Faith, faith that God is sovereign over all things, that God is love and intends ultimate good for God’s creation, hope that everything will one day be clear and suffering and evil will be conquered fully after having served their purposes–as inscrutable to us as those purposes may be–is the answer. It is, admittedly, an answer that I find at once entirely frustrating and comforting. It’s not my job to solve the problem of evil and suffering; it’s my job to respond to evil in suffering in the way that God has instructed me.

Part of the brilliance and beauty of Russell’s book–and only part, mind you–is that she takes the same approach. There is no attempt to answer the question of suffering, only an attempt to hold it in her hands and turn it at all angles for the reader to view, to experience in part, all of its manifest complexity and difficulty. There are no apologies here, no arguments, only an investigation of the issue that is by turns beautiful and terrifying, humbling and infuriating.

I don’t want to give too much of the plot away, but I’ve got to at least tell you what the book is about, right? All of that investigation into theodicy is not exposition or diatribe, it is examined through the experiences and humanity of the characters.

The Sparrow tells of the aftermath of a first-contact mission put together in secret by the Society of Jesus to the planet of Rakhat, discovered by the Arecibo facility in Puerto Rico in 2019, when the astronomy equipment there picks up radio signals that turn out to be the singing of the indigenous peoples of Rakhat.

Only priest and linguist Emilio Sandoz survives the mission; the handful of clergy and layperson companions that accompany him to Rakhat do not. The time dilation of space travel, the reports of the second, secular mission to Rakhat, and reports from the first missionaries themselves seem to tell the tale of a horrific fall from grace and into depravity on the part of Sandoz. The story jumps back and forth between the Jesuit interviews with the recovered Sandoz (in an attempt to discover the truth of the reports and, hopefully, salvage something of the Jesuit reputation after the reports of the missionary journey have decimated it), the first discovery of Rakhat and the synchronicity that brought Sandoz and his companions into the mission in the first place, and the events that actually unfolded on Rakhat. These separate narratives meet, as it were, at the climax of Sandoz’s telling of his story.

That main thread, and its analysis of theodicy, contrasted with the modern missionaries’ own thoughts about their relationship to the 16th century missions of the Jesuits to the “New World”, form the core of the text, but Russell’s writing of the missionary characters, their backgrounds, their feelings, their developing relationships to one another, their thoughts about their places in Creation as they confront their missionary (or priestly) status, provides just as much literary joy and human insight as the “mystery” that frames all of these subplots.

This is, after all, a sci-fi story (one for which Russell won the Arthur C. Clarke award in 1996, the year the book was published), and great detail is paid to the physiology and culture of the peoples of Rakhat, to the methods of space travel (the missionaries convert a mined-out asteroid into their spaceship) and the believable physics of story. At the same time, those elements never get in the way of the narrative; no time is lost on long exposition about the nature of technologies or theories of culture and alien psychology. These run seamlessly throughout the text, woven in with the unfolding plot instead of interrupting it.

The writing itself is beautiful, jealousy-inducing for an aspiring writer such as myself. The blend of familiar, practical tone with clever description and amusing turn-of-phrase reveals the intelligence and imagination of the mind behind this tale in an ever-delightful manner. The pacing and plotting of the story are an example of mastercraft in that aspect of the art, something especially apparent to me as I struggle with revising the plotting and pacing of my own fledgling work.

I must also express a debt of gratitude to my wife for bringing me to read this book. It’s one she first read–and told me about–almost a decade ago. It sounded interesting, but I must not have been paying close enough attention to her explanations, because this a book that fits with my own interests so uncannily perfectly. Only when she announced that she was going to read it again, now that her experiences in ministry and seminary had sharpened her abilities to appreciate the tale, did I agree to read it alongside her. As I must often admit, she was right all along. I should’ve read it the first time she told me to. So should you.

The writings posted to this site, whether blog posts, commentary, works of fiction, etc., are the property of the author. The author claims no rights to images or design elements of the site unless specifically noted. Visitors to and users of the website are granted the following non-exclusive and limited licenses to material owned by the author: to reproduce the material only for personal and non-commercial use, to link to the material with proper attribution to this website. No other usage of the material is permitted without the express permission of the author.
Join 411 other followers
Follow Faith, Fiction & Fatherhood on WordPress.com
butimbeautiful